In my career, one of the challenges that I’ve been given multiple times is to fix those occasional IT projects that are off the rails. So my job has been to come in, figure out what’s wrong, and guide the project back to success. There are lots of reasons why projects struggle but a lack of common ground or common understanding is one of the most frequent. On one of those projects, as I was getting up to speed, I had a developer say to me “You know, none of us really understand this solution from end-to-end.” As I dug into it, I realized many of the developers who worked on various components had never been exposed to any other component or really understood how the system would be used in the field. Most had never met an ‘actual user’. And unless they were on the UI team, they hadn’t even seen what the interface looked like.

There is old story I probably have told to every team in this situation that goes like this: In the olden days, a woman is riding along on a horse and she sees two men in a quarry, cutting stone. She stops and asks the two men “What are you doing?” The first one looks at her and says “Well, look at us. I am cutting this stone.” (When I tell the story, the dismissive “are you an idiot?” tone is quite clear in the first speaker!) The second one proudly says “I am part of a team that is building a cathedral.”

Then I ask my teams… which one of those people do you trust to do a great job? No one has yet been enough of a wise guy to answer ‘stone mason #1’. And the lesson is – context is critical. The more we understand the bigger picture and the more we see how our role is important in that big picture, the more likely we are to make sure that we meet and exceed our commitments.

And yet most business and certainly most projects don’t spend nearly enough time on context and the big picture. I try to remind my teams of the context in some way in every meeting. Sometimes is why it is “us” that is working on this tough assignment. Or why this project is important to our client. Or our company. In the middle of some problem if someone is complaining about why we have to fix this – isn’t it good enough as is – I talk about the impact of not fixing it – to the end user, to our client’s customer, whoever. When I don’t know the impact – I ask my client to share it so we truly understand.

People want to know their work has real value. Remind them of it even when they don’t ask. 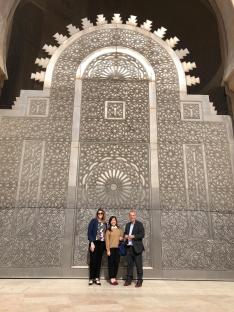 The tile work is exquisite at the Hassan II Mosque in Casablanca. 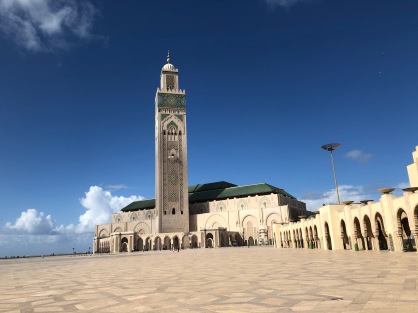 The Hassan II Mosque in Casablanca. Built in 7 years. at the peak, over 1000 workers during the day and at night working together to create a harmonius structure. They understood their role in creating something bigger than themselves.

With over 20 years of consulting experience I've worked with clients in the banking, retail, travel and government sectors. Based in Toronto, Canada, currently I lead the Cloud consulting team for IBM Canada. I've led successful project and program teams in Canada, the US, and Europe of more than 200 people. Thoughts, comments and mistakes are most definitely my own! View all posts by Mark Dymond, P.Eng

2 thoughts on ““I am part of a team that’s building a cathedral.” Why context is king.”